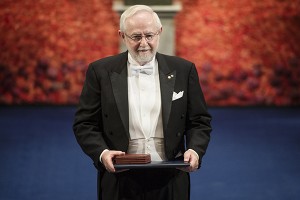 Dr. Arthur McDonald received the prestigious Hal Rogers Fellow on April 12, 2016. He is a native of Sydney, Nova Scotia.

Dr. McDonald was awarded the 2015 Nobel Prize in Physics jointly with Japanese physicist Takaaki Kajita for discovering the oscillations of neutrinos from one flavour (electron, muon, or tau) to another, which proved that these subatomic particles had mass. Since 1989 he has been Director of the Sudbury Neutrino (SNO) Collaboration.