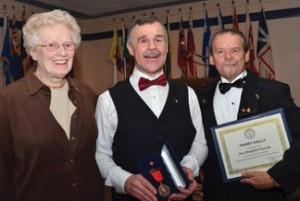 Terry Kelly is a Canadian athlete, award-winning singer and musician and inspirational speaker. Blind since he was a toddler, Kelly is a strong supporter and champion for Canadian troops. Kelly visited soldiers in Afghanistan and helped launch the Portraits of Honour tour in 2011.

His song, Pittance of Time, was written for our veterans and troops abroad, for our living and fallen heroes. The song inspired a musical drama created for the stage.

Diane Rogers presented the HRF award to Kelly, saying “Tonight’s recipient is a gentleman who by his own example, his music and his inspirational talks, has helped thousands of all ages and walks of life to believe in themselves, believe they can overcome challenges and believe they can realize their dreams.”

In 2003, Kelly was appointed to the Order of Canada. His inspiration, determination, optimism and love of life is — and will continue to be — felt throughout our Nation and beyond.