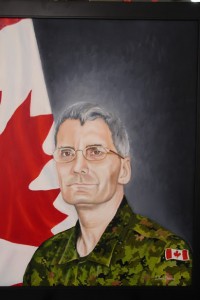 On October 20, 2015, Warrant Officer Patrice Vincent was recognized and honoured (posthumously) with a Hal Rogers Fellow award, sponsored by <a title=”The 49th Parallel North Fund” href=”http://kincanadafoundation.ca/the-49th-parallel-north-fund/” target=”_blank”>The Kin Canada Foundation 49th Parallel North Fund</a>. A 28 year veteran of the military, who served with distinction across the country, WO Patrice Vincent died as a result of injuries sustained when an ISIL-inspired terrorist purposely rammed his vehicle into Vincent and another soldier in Saint-Jean-sur-Richelieu, Quebec on October 20, 2014.

At a memorial service held in his honour, Vincent was remembered as a happy, smiling person who was always ready to help and didn’t ask nothing in return.

A portrait of WO Patrice Vincent was commissioned and painted by <a title=”Portraits of Honour” href=”http://www.kincanada.ca/portraits-of-honour” target=”_blank”>Portraits of Honour</a> artist and Hal Rogers Fellow Dave Sopha. The portrait was presented to his family during the ceremony.