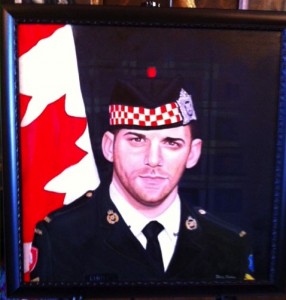 Portrait of Cpl Nathan Cirillo, painted by POH artist Dave Sopha, will be displayed in the military museum of the Argyll and Sutherland Highlanders

On February 23, 2015, Cpl Nathan Cirillo was recognized and honoured (posthumously) with a Hal Rogers Fellow award, as part of the newly created The 49th Parallel North Fund. Cpl. Nathan Cirillo was fatally shot while honouring our veterans at the War Memorial in Ottawa on October 22, 2014.

Cpl. Cirillo had a special connection with Kin Canada founder Hal Rogers, in that they both called the Argyll and Sutherland Highlanders regiment their own.

A portrait of Cpl. Cirillo was commissioned and painted by Portraits of Honour artist and Hal Rogers Fellow Dave Sopha. The portrait will be displayed in the Argyll and Sutherland Highlanders museum.

Along with the Hal Rogers Fellow award which included a commemorative certificate, pin and medallion, the family of Cpl Cirillo also received a portrait, commissioned by the Cambridge-North Dumphries Kinsmen.