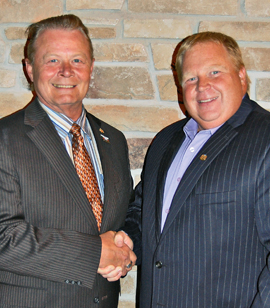 Bruce Lloyd, Fergus & District Kinsman, Past National President, Life Member and driving force behind the Portraits of Honour Tour, received a Hal Rogers Fellow at the Fergus Scottish Festival and Highland Games, an event his company Ralph Basset Associates has served for 17 years as sponsorship manager.

Within the Association, Lloyd has been a leader in every way imaginable. He has held almost every club position including president. He has been a Zone deputy governor, District service director, Kin-CFC Liaison Committee chair and is a past national president. Lloyd began his Kin career as Rookie of the Year and has won Kinsman of the Year seven times. His awards include the Maple Leaf, an Outstanding Maple Leaf, Outstanding Club President, Founder’s Award for Achievement and Outstanding Deputy Governor.

Professionally, Ralph Basset Associates has won numerous marketing and customer service awards and prides itself on helping clients “make an unprecedented impact on the communities in which they operate.”

Lloyd has been fundraising for cystic fibrosis (CF) research since his niece Diana was diagnosed with the disease in 1975. Diana lost her battle with CF in 2002; Lloyd’s fight continues.